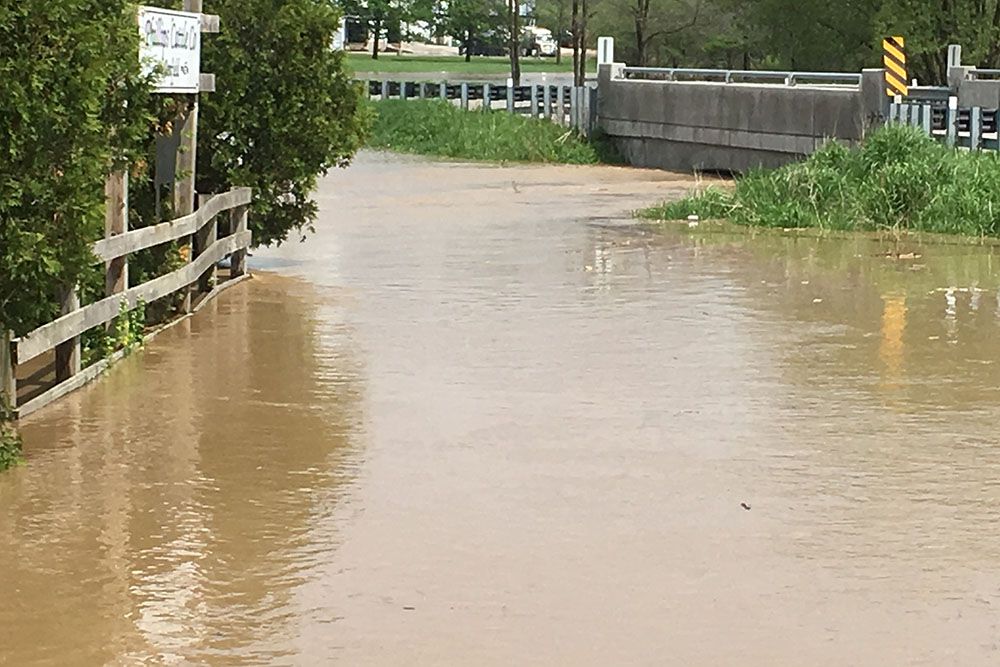 The May 25 storm event was a significant and infrequent event that hit local communities in south of watershed.

Flooding hits local communities such as Lucan, Parkhill, Nairn and Ailsa Craig on Saturday, May 25, 2019

Flood impacts in parts of Parkhill could have been worse without flood control infrastructure such as diversion channel and Parkhill Dam: ABCA

Heavy rainfall from a series of thunderstorms early in the morning on Saturday, May 25, 2019 caused flooding which hit hard in communities in the south of the Ausable Bayfield Conservation Authority (ABCA) watershed. Parkhill, Ailsa Craig, Nairn, and Lucan were among communities hit hardest by flooding.

The rainfall ranged from 20 to 87 millimetres (from nearly one inch to almost 3.5 inches) across the watershed, according to ABCA’s network of stream gauges. The hardest-hit communities had rainfall ranging from 50 mm to 100 mm (from two inches to as much as four inches), according to volunteers with the ABCA’s Volunteer Rain Gauge Network. Most of the rainfall occurred over two hours. The flood impacts were largely on smaller watercourses and farmland rather than major rivers but ensuing flooding was some of the worst faced by those watershed communities in years, according to staff at ABCA.

The heaviest rainfall carved a path from west to east roughly following Highway 7. Heavy rain caused many local drainage issues. High overland flow caused road closures. Flooding in Parkhill could have been even worse but water control infrastructure helped to limit the extent of impacts, according to ABCA. The Cameron-Gillies diversion channel is dry most of the time except during significant storm events when the channel redirects flow to Parkhill Reservoir. During the May 25 storms the diversion channel was about two thirds full.

The worst of the flooding on May 25 took place between 5 a.m. and 9 a.m. but water levels continued to rise over the morning. There could have been more potential for severe flooding throughout the hardest-hit watersheds, and beyond, during the May 25 event except there was significantly less rain in the upper parts of the watershed, according to ABCA staff. This was fortunate as the lower amount of rain in the north did not contribute greatly to water levels, staff say. Weather forecasts on the Saturday were projecting a likelihood of strong thunderstorms later in the day and as a result the ABCA issued a Flood Warning at 11:30 a.m.

ABCA issues three levels of flood messages: Watershed Conditions Statements (Flood Outlook and Water Safety); Flood Watches; and Flood Warnings. The terms used by the conservation authority now match those used by Environment and Climate Change Canada: 1. Statement, 2. Watch, and 3. Warning. The May 25 flood event was the seventh time in 2019 a flood message was issued to municipalities and residents in the watershed. ABCA issued the flood warning to flood coordinators in the municipalities of North Middlesex, Lucan Biddulph, Middlesex Centre, Warwick, and Lambton Shores. The conservation authority also shared the flood warning on the abca.ca website and on social media channels.

The amount of rain that hit these local communities on May 25 turned out to be about three times the amount of rain that had been forecast by meteorologists, according to ABCA.  During the previous six flood events of the year the advent of rainstorms was more or less predictable, staff say, but the “training line of thunderstorms” in the May 25 event was not predictable. Storms like the May 25 event are infrequent, staff say. Severe localized flooding on May 25 occurred at an intensity, scale, location, and duration that can’t be predicted by weather forecasters, according to staff. Data and information systems run by the ABCA did alert staff in time to issue the flood warning during the morning as water levels continued to rise.

Conservation authorities, in their provincially mandated role, monitor watershed conditions, interpret forecasts, and share with municipalities what local impacts are occurring (Flood Warning) and when a flood event is likely to occur (Watershed Conditions Statement – Flood Outlook and Water Safety; and Flood Watch). In addition to flood forecasting and warning, ABCA provides technical and planning assistance. Municipalities create emergency plans. The Ontario Ministry of Natural Resources and Forestry (MNRF) plays a lead role during flooding emergencies.
To find out ways to reduce flooding locally, and for other flood forecasting and warning information, visit abca.ca at this link: