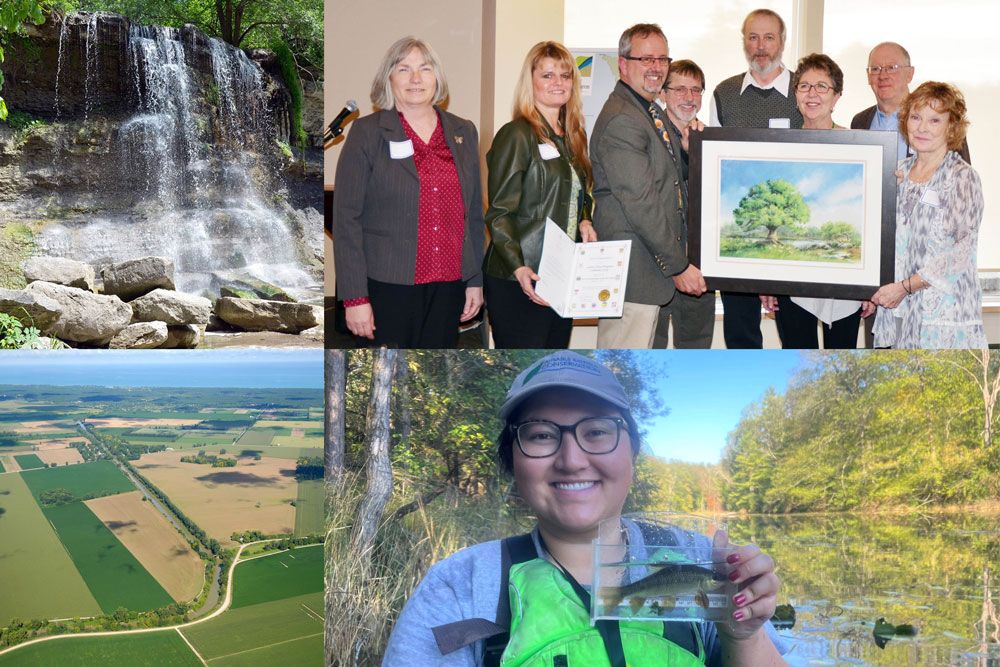 Lambton’s ‘other’ shore: Celebrating the Ausable River and 75 years of conservation

The Municipality of Lambton Shores is blessed with fantastic natural features such as Lake Huron beaches and sand dunes; and Carolinian forest and deep, fertile soils. With big Lake Huron forming the western border, it’s easy to overlook the Ausable River, which forms the eastern municipal boundary. One of the most species-rich river systems in Canada, the Ausable supports more than 80 different fish; 26 species of freshwater mussels; and 21 reptile species.

Entering the municipality at Rock Glen near Arkona, the Ausable flows north through the Ausable River Valley, a provincially recognized Area of Natural and Scientific Interest (ANSI) along the river between Rock Glen and Thedford. The steep-sided valley is home to Carolinian forests with trees such as Flowering Dogwood; Sassafras; and Tulip Tree reaching their northern limit here.  At the bottom of the valley, the river’s sand and gravel riffles support rare freshwater mussels such as the Snuffbox; Northern Riffleshell; Wavy-rayed Lampmussel; and the Purple Wartyback.

In 1892, the Grand Bend Harbour was cut through to the lake, cutting off 14 kilometres (km) of river bed to the south. Today, the spring-fed Old Ausable Channel (OAC) provides habitat to a number of rare fish. The mouth of the Ausable River at Port Franks is also a place of great biodiversity. The main river; Mud Creek; and several small spring-fed inland lakes, wetlands and intervening dunes support a variety of birds, mammals and reptiles. The Port Franks area is home to Ontario’s only lizard (the Five-lined Skink) and was the last place in Canada where the extirpated Karner Blue Butterfly was seen.

Rock Glen Conservation Area is another example of community collaboration to support conservation and highlight also some of the unique natural history of Lambton Shores. Park development surrounding the waterfall and river area was initiated in 1948 by the Arkona Lions Club. Picnic tables, swings and barbecues were donated by the Lions Club and placed in a park area above the Rock Glen Falls waterfall. In 1954 the former Ausable River Conservation Authority purchased the nine-acre park area, which has expanded to 60 acres since that time. In 1985, Arkona Lions Museum and Information Centre was moved to Rock Glen, where it continues to showcase fossils and cultural artifacts from the Lambton Shores region. The Lions continue to operate the museum (which is currently being renovated) which, along with the waterfall, picnic grounds and hiking trails, draw tens of thousands of visitors annually.

More recently, conservation efforts have focused on stewardship projects to protect and improve water quality. The health of the river, and the lake, depend on our collective efforts to keep soil and contaminants out of our streams. A drive along any of the rural roads in the municipality and you will notice where people are taking positive actions such as tree-lined streams; field windbreaks; and water control berms. These stewardship projects on our farms and other lands help reduce surface water runoff, reducing soil erosion and downstream flooding, sedimentation and erosion of streams. By keeping topsoil in fields, these projects also improve soil health and agricultural productivity, a true win-win.

Lambton Shores is fortunate to have many active volunteer groups engaged in conservation projects. The Lambton Shores Phragmites Community Group has made significant progress in managing invasive Phragmites grass which threatens boating and significant wildlife habitat. Similarly, Lambton Shores Nature Trails is involved in development and maintenance of more than 20 km of hiking trails with trail maps, interpretive signage and projects such as installation of a floating dock and stairs for canoes and kayaks at Ausable Cut Conservation Area. The Lakeshore Eco Network, through fundraising and educational events, supports tree planting, climate action and conservation in the region.

These are just a few examples to illustrate the hard work and dedication of community volunteers that supports the health of our community and its natural areas. As we celebrate 75 years at Ausable Bayfield Conservation Authority, we look forward to continuing this important work in partnership with the community.

– In 2021, Ausable Bayfield Conservation Authority (ABCA) is celebrating its 75th anniversary (1946-2021) and 75 Years of Conservation. ABCA is honouring its 12 member municipalities, during this anniversary year, for their partnership, over the past 75 years, which helps to protect life and property, water, soil, and habitat for all living things. To learn more visit abca.ca and this web page: