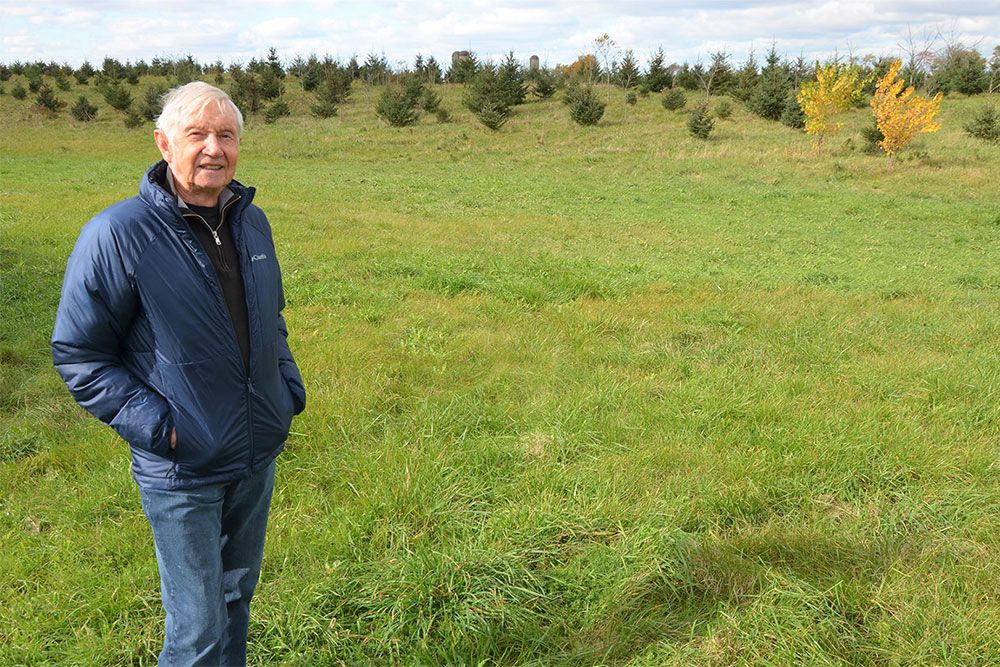 David Ball is one of many Adelaide Metcalfe landowners planting trees and completing stewardship projects.

Conservation is not new to Adelaide Metcalfe. The Township of Adelaide was a founding member of the former Ausable River Conservation Authority, established in 1946 through a partnership between local municipalities and the Province of Ontario. The township has had a representative, a voice and a vote at the boardroom table ever since. As such, it is part of a 75-year effort to conserve water and soil and shows commitment from councils, staff and landowners.

Sixty-six square kilometres (16,308 acres) in Adelaide Metcalfe township drain into Adelaide Creek. The headwaters are near Highway 402 and enter the Ausable River north of Keyser in North Middlesex. From there, the Ausable River flows through the Ausable Gorge, Ausable River Cut and eventually reaches Lake Huron at Port Franks. The municipality is also in the Sydenham River watershed which is part of the St. Clair Region Conservation Authority.

Several landowners have worked with Ausable Bayfield Conservation Authority (ABCA) staff to complete on-the-ground projects such as tree planting, wetland creation and erosion control that conserve soil and water in the community and downstream. David Ball, of Ball Farms, is one of those landowners.

David has been doing conservation projects on his farms for 30 years. He was a Conservationist of the Year Award winner in 1992 after he completed a project to fence cattle out of the watercourse and provide alternate watering. Since then he has planted trees on several farms and along creeks. These trees have many benefits including protecting the creek banks, holding onto soil, and providing shade which lowers water temperatures for aquatic life. In the days when there was cattle at Ball Farms they did fencing and planting projects to reduce erosion. Erosion from wind and runoff is always an issue so “trees help to keep the soil in place.”

David is one of many landowners in the Township of Adelaide Metcalfe who are planting trees and practising land stewardship to protect soil health and water quality. David says he’s not the only one planting trees – his neighbours are also working with the conservation authority to plant trees for the future.

Ball Farms is located near Kerwood, Ontario. David is the third generation of his family to farm at the family farm. “I have been here all my life as was my father before me and his father before him,” he said. He is a self-described tree lover and bird lover who has worked with Ausable Bayfield Conservation to plant about 40 acres of trees. “Over the years I’ve planted a number of trees,” he said. When visited at his farm by ABCA Forestry and Land Stewardship Specialist Ian Jean, David jokes that “I try to keep Ian busy.” About 10 per cent of David’s property is in trees. He has planted trees in areas where it’s not practical to farm. “I’m putting the trees back where it’s not practical to use the big machinery of today,” he said.

David likes the wildlife that shows up after he has planted trees, like deer and many kinds of birds (including meadowlarks, red-winged blackbirds, finches, orioles, turkeys, woodcocks, and hawks.) As trees grow, “species show up we didn’t have before,” he said. David enjoys Carolinian tree species and he also enjoys the changing of colours in autumn when deciduous trees drop their leaves. People enjoy watching the trees grow over the years, he said.

We thank David for his efforts and we thank all the landowners making stewardship improvements in the Township of Adelaide Metcalfe. In the past 10 years, four landowners have restored 9.4 acres of wetlands and enhanced or retired an additional 9.6 acres of wet area surrounding the wetlands in Adelaide Metcalfe.  In addition, 500 trees were planted around one of the wetland sites. These projects consist of excavations and berms to hold back water in flood plain areas.

The wetland projects help to provide water storage on the landscape during storm events reducing flooding and erosion downstream. They allow sediments and nutrients to settle out in the wetland and provide filtration, reducing the sediments and nutrients that end up in the rivers or Lake Huron.
Landowners have been doing good work beyond their partnership with the two conservation authorities.

Everyone has a role to play in protecting water for current and future generations and we thank them for their efforts.