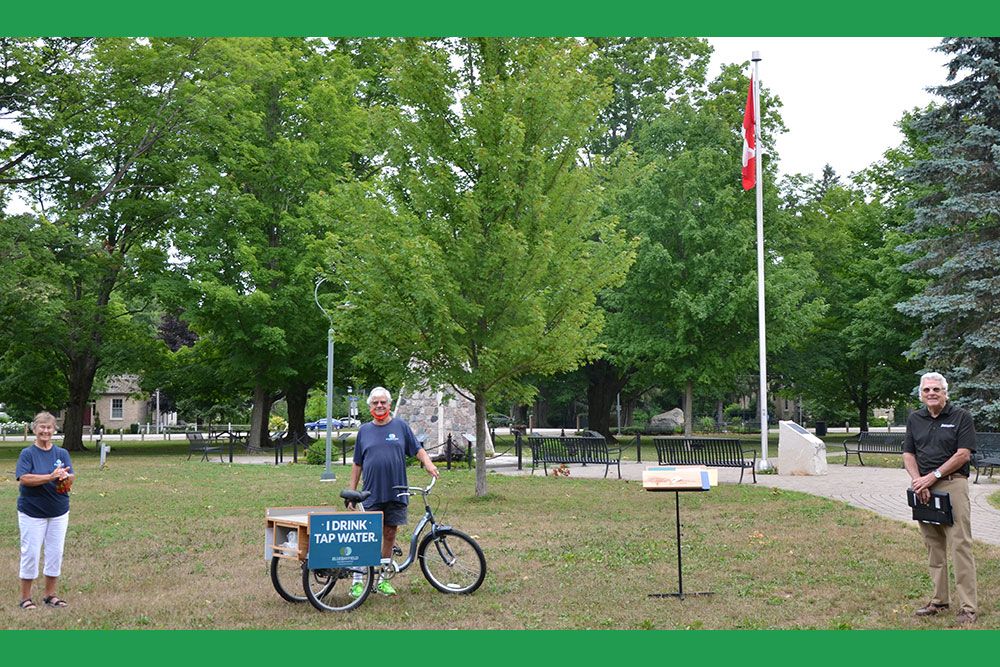 Ausable Bayfield Conservation has announced the winner of the Conservationist of the Year Award, in 2020, is Blue Bayfield.

The award recipients receive a handcrafted award made by Bob Hutson, of Windbreak Farm (windbreakfarm.ca) Custom Woodworks near Fullarton, Ontario. The engraved dual-purpose board is a piece of art on one side and a serving tray on the other and is made from reclaimed wood and select local hardwoods.

In addition to the prize, Ausable Bayfield Conservation is donating towards a tree and plaque at a Commemorative Woods.

“We are honoured to recognize Blue Bayfield as Conservationist of the Year Award winner,” said George Irvin, Past Chair. “These dedicated citizens and volunteers have worked tirelessly to prevent polluted runoff, plastics, and other pollutants from entering our waterways and Lake Huron. We congratulate Blue Bayfield and thank them for their work. They are truly making a difference in their watershed community.”

Formerly known as Friends of the Bayfield River (FoBR), Blue Bayfield was founded in 1998. It has partnered with all levels of government, citizens and community groups, Ausable Bayfield Conservation, and other partners.

Ray Letheren, Blue Bayfield Co-Chair, thanked ABCA for the award and thanked citizens of Bayfield and area. “The board of Blue Bayfield is grateful to many citizens, eateries and other businesses in the region that have committed to reduction of single-use plastics,” he said. “In Bayfield, they are identified by stickers on their entrance windows.”

Blue Bayfield, and its community partners, have installed five water bottle refilling stations in the village of Bayfield and distributed 2,500 refillable water bottles. Over three summers, there have been more than 70,000 refills at the water stations. That’s the equivalent of keeping 70,000 disposable water bottles out of landfill sites and out of our watercourses.

Blue Bayfield provides a mobile hydration station dubbed ‘Blue Betty.’ The adult tricycle was fitted with a platform to transport tap water and compostable cups to the beach and outdoor events.

Blue Bayfield works with other local community groups, businesses and levels of government to help create a sustainable environment from land to lake. They host and take part in annual beach and park cleanups. Their volunteers have helped plant rain gardens at Pioneer Park to prevent polluted water, running off of land, from reaching Lake Huron. They have been leaders in reducing use of disposable plastics in the village of Bayfield and beyond. (Plastics – including microplastics and nanoplastics – pose a threat to aquatic life in Lake Huron and other water bodies).

These volunteers have promoted green infrastructure such as downspout disconnections, rain barrels, and rain gardens. Blue Bayfield volunteers have inspired action, taken action, and offered education to the public, such as a sustainability summit and a plastics reduction workshop. Blue Bayfield has supported initiatives such as sustainable packing and local products.

Blue Bayfield has been recognized by the Council of Canadians. Bayfield is the first community in North America to be recognized, in 2017, as “plastic-free” by the British ecological group Surfers Against Sewage. Blue Bayfield outreach committee members have addressed more than 25 communities in Ontario over the last two years.

They have addressed a conference in Wetaskiwin, Alberta attended by eco groups from Alberta and Yukon (100 delegates). This has resulted in communities adopting the Bayfield model. Blue Bayfield has played a key role in encouraging the Municipality of Bluewater to develop an Environmental Committee comprised of representatives “from every corner of the municipality.”

ABCA presented the Conservationist of the Year Award in Bayfield, on July 22, 2020, with social physical distancing during the current pandemic.

Learn more about the conservation awards at this link: