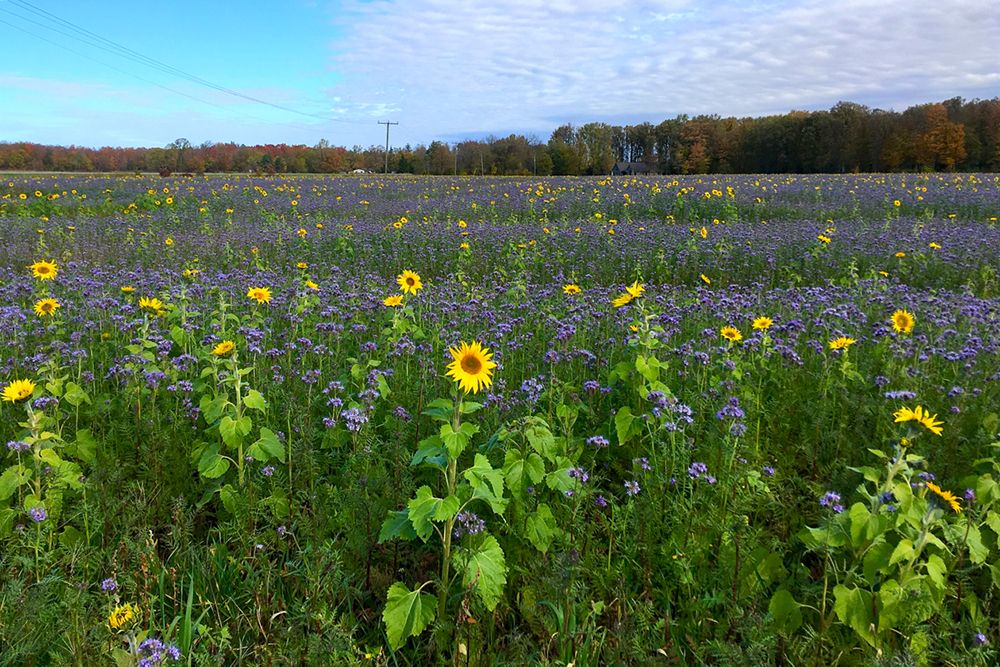 World Soil Day 2019 was Thursday, December 5. Soil compaction was an issue of local focus, according to Ausable Bayfield Conservation Authority (ABCA). There were many wet fields in this part of Ontario in autumn 2018, spring 2019, and autumn 2019. Wet weather made it difficult to harvest. That led to damage to soil in many places, according to Ross Wilson, PAg, CCA-ON, Water and Soils Resource Coordinator with ABCA. The Certified Crop Advisor offers five management options agricultural producers could consider to limit soil compaction risk:

The soil compaction problem is noted in Ontario’s Agricultural Soil Health and Conservation Strategy. (To find out more visit this web page: Ontario’s Agricultural Soil Health and Conservation Strategy) When soils are too wet, tillage passes (from ploughs, cultivators, and other equipment) can create subsurface compaction. Today’s larger, heavier equipment can add to compaction. “Shallow compaction may be reduced by using lower tire inflation, or using tracks rather than tires, which reduce the downward force on the soil,” according to the Ontario Ministry of Agriculture, Food and Rural Affairs (OMAFRA). “Deep compaction can … be reduced by reducing the axle weight of machinery.”

Tillage passes can reduce water percolation and root development. Compacted soil impairs crop production and soil health by “reducing the air available for respiration, decreasing the amount of water that can reach plant roots, increasing the risk of surface runoff, reducing root penetration and degrading soil structure,” according to OMAFRA. The Ministry suggests farmers may reduce severe compaction risk by keeping machines out of wet fields when possible. Driving equipment on permanent tracks on the field may limit compaction to these areas.

Bouncing back from bad harvest conditions requires a number of long-term ways to “build a stronger more flexible soil,” according to OMAFRA. “A varied or complex crop rotation with wheat, the addition of manure or other organic materials, use of cover crops and of course reducing tillage and overall traffic will help to build a more stable soil structure,” according to the web page content written by Anne Verhallen, OMAFRA Horticulture Soil Management Specialist. “Improving drainage can help to improve overall soil structure over time,” the web page says. “Consider equipment weight and tire pressure to reduce ground pressure and the potential for deep and lasting compaction.”
The following are some short-term and long-term management options, from OMAFRA, to consider:

World Soil Day helps to raise global awareness of the importance of soil. The day focuses attention “on the importance of healthy soil and advocating for the sustainable management of soil resources,” according to the FAO web page.

The international theme for World Soil Day in 2019 was to “stop soil erosion, save our future.”

To learn more about #WorldSoilDay visit this web page:

Local research has shown how covered soils store water and help to limit water running over land during storm events. Soil health actions like cover crops can help to preserve topsoil, contribute to the long-term ability for that soil to produce food, and protect local creeks, rivers, groundwater, and Lake Huron.

Soil’s important work should not be taken for granted, according to Ross Wilson, PAg, CCA-ON, Water and Soils Resource Coordinator with Ausable Bayfield Conservation Authority (ABCA). Once soil health is lost, it’s very hard to get it back again. There are many reasons soil is vital. Healthy soil uses nutrients, grows food, and provides habitat for billions of living creatures. It is vital to protect this valuable resource, especially as the world demand for food grows, according to soil health advocates.

People and groups around the world promote the value of soil health leading up to World Soil Day. A local ABCs of Soil Health social media campaign, spearheaded by Ausable Bayfield Conservation, ran each day, for 26 days, in 2018, with the posting of a daily soil health message for a different letter of the alphabet from A to Z. The USDA Natural Resources Conservation Service (Iowa NRCS) ran an ABCs of Soil Health education campaign in 2016. Staff at Ausable Bayfield Conservation liked the idea so much they adapted the concept for use locally. The local soil health posts had a social media reach of more than 20,000 and local landowners were engaged by the posts on Facebook and Twitter about 2,000 times. Agricultural media picked up on the campaign provincially and local print and broadcast media also shared the soil health message.

To read the daily soil health posts you may visit the Facebook page or Twitter feed with links at abca.ca. You may also visit their soil health web page at this link: