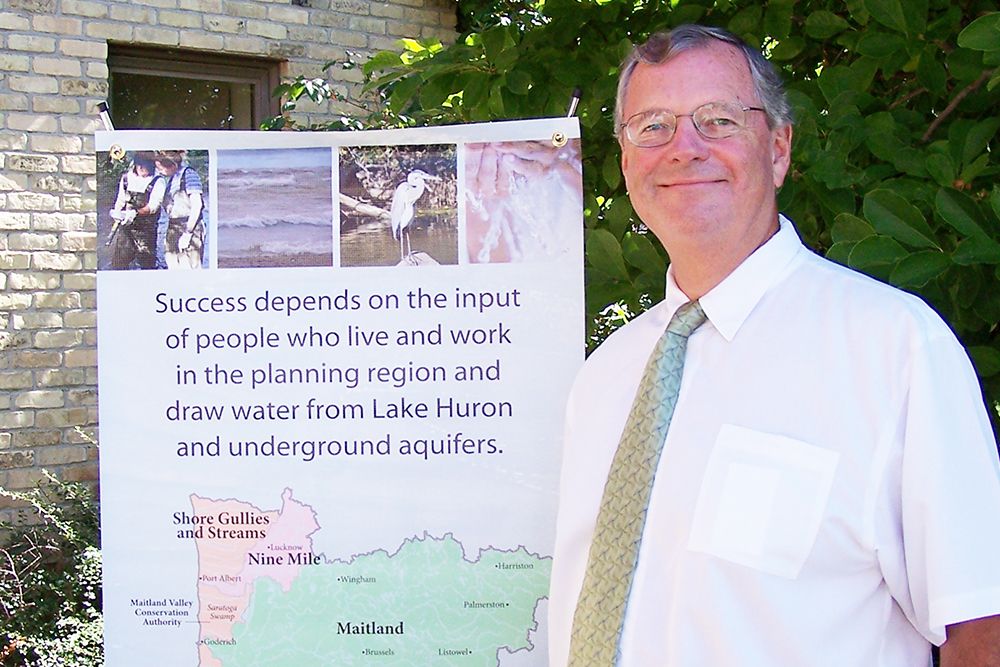 Laurence Brown, or Larry Brown, was the first Chair of the first Drinking Water Source Protection Committee in Ontario.

He was also our leader, colleague, and friend.

The Province of Ontario announced Larry’s appointment as Chair of the Ausable Bayfield Maitland Valley Source Protection Committee in 2007. He capably served in that role until retiring from the Chair position in 2016.

Our entire region benefitted from a decade of Larry’s leadership.

We were privileged to honour Larry for his years of service with a tribute at a source protection committee meeting in September 2016.

We remember Larry for his calm and steady, skilful, and visionary leadership.

It is fifteen years since the passing of the Ontario Clean Water Act, 2006. People are now familiar and comfortable with this successful program but a decade and a half ago, source protection was something new and when things are new they can be a worry for people.

Stakeholders were concerned at that time. We needed an experienced, capable, calm, knowledgeable, and steady leader to reassure people that we could protect drinking water sources, in a practical and science-based way, while not placing any unreasonable burdens on people.

Larry was the face of source protection. He was at the front of the halls, at many meetings and open houses, leading an intense and comprehensive public consultation.

He built a foundation of information exchange and respect upon which source protection plans could be built.

Larry met with individuals and with many interests in the industrial, commercial, agricultural, residential, municipal, and institutional sectors.

He guided the creation of locally developed, provincially approved source protection plans. This was not an easy task. There were years of technical work, complex science, and robust discussion at the committee table.

Larry was able to respect and listen to the questions and concerns raised by the different voices at the table. He was able to synthesize that input into plans that respected all those interests, and valued that local knowledge and expertise, and, at the end of the day, the whole committee got behind their approval and implementation.

Larry envisioned and implemented a robust public education and engagement program that would build the strong foundation upon which later policy implementation and risk management measures were added.

The safety of our municipal drinking water sources, and the health of our people, have benefitted from his leadership.

Another sign of a great leader is when they build an organization or program that can live on even when the person in charge retires. Larry managed a seamless transition to new Chair Matt Pearson who had served with the committee since the beginning.

Larry was a proud resident of the local Parkhill area.

Larry Brown, a registered professional engineer, worked in both the private sector and the public sector.

He worked for 3M and he became General Manager at Tuckey Beverages.

Larry gave many years of skilled and steady leadership as a public administrator. He was a member of the Association of Municipal Administrators of Ontario and former Chief Administrative Officer of the Municipality of South Huron and, before that, with Stephen Township.

He earned a Master in Public Administration from University of Western Ontario and a Bachelor of Applied Science in engineering from the University of Waterloo.

We think, at this time, of Larry’s dear wife Jane and their children and grandchildren. We think also of his siblings and the entire family as they mourn this great loss.

We think of Larry’s bravery dealing with a long and brutal illness.

We know Larry and Jane loved sailing on the water as well as protecting the water.
We will try to concentrate on those happy memories.

Those of us who knew you can consider ourselves lucky indeed.

If you did not know Larry we can only share what a joy it was to know him.

Even if you did not know him, if you live in, or visit, Ausable Bayfield or Maitland Valley watersheds, you can know the water is safer and cleaner because of the work of Larry and the committee he led and the years of service he gave.

Larry – you left a proud legacy for your community. Your work, your legacy, and your memory – will live on.

Here is a short slide show video tribute to Larry and his exemplary contributions to cleaner, safer water in this part of Ontario:

Here is the obituary for Laurence Ross Brown: